I have inherited this photo from my father who passed 2012.
I am reluctant to post the complete photo, as to me it appears to be something quite rare and possibly of value.
I’m no expert.

To my interpretation it shows either the Hiroshima or Nagasaki blasts taken from an aircraft immediately after detonation from some distance away.
It literally makes all the hair on my arms stand straight up.

I was hoping someone here may be able to direct me to an expert who may be able to evaluate the photo, and advise it’s worth. Both historical, and monetary.

I would be able to post a fragment of the complete photo, but even here I am reluctant to do so due to what I feel is the rarity of this photograph.

In online searches I have been unable to find anything similar altho there is one that seems to be of the same detonation but on the other side of the compass from this photo. The online photo also appears to be taken seconds later than the one in my possession: 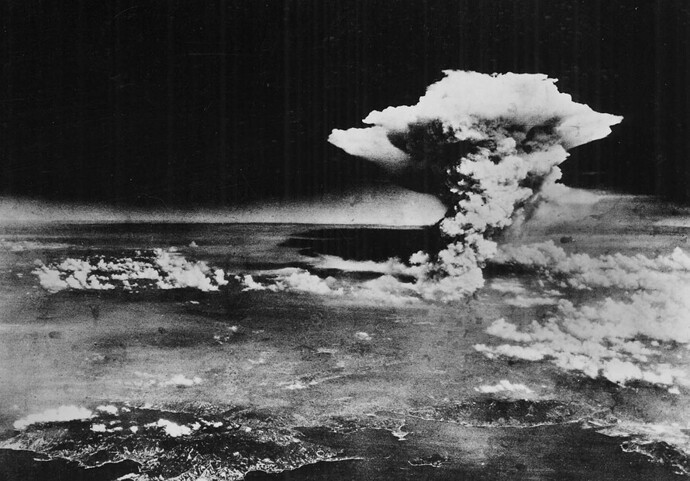 In the online photo sunlight is coming from behind the camera. In the photo I have, the camera is shooting into the sun. These are all guesses on my part… I am unable to match up any geological features in either one, so for all I know they may not be of the same detonation.

I am quite sure that this photo is of one of the 2 bombs that were dropped in Japan.

The mushroom cloud in my photo is similar to the one in the online photo.

I also have another photo of McArthur speaking to troops, taken from behind the platform\dias. I have no idea what this one might be worth either.

If anyone could advise me on how to proceed with these photographs, I would be most appreciative.

This exact image is very common on the internet. The BBC have this listed as Hiroshima (the image is accredited to Associated press).

It is worth nothing.

Anything MacArthur did was heavily photographed by his personal propaganda corps and is worth the same.

Correct… the image that I posted here is the internet image I was able to find.
I did not post the image of the photo in my possession, but it appears to be the same mushroom cloud but taken from the other side. It may also be possible to see either the plane that the internet photo was taken from or, the plane that dropped the bomb itself or, another support craft tasked to the mission or, it may be dust or some other artifact.
This image is a scan of the reverse side of the photo. Under the scribbling it says “Bombers over Japan-1945 Sent by ****.” Under that its written “Reprint by copy-No 3 paper.”:

The mention of #3 paper means that the print you have was printed on photographic paper that has a #3 contrast, about mid way in the contrast scale. As to value of your print, not certain anyone here can answer that question, but may well know the person who can .

The mention of #3 paper means that the print you have was printed on photographic paper that has a #3 contrast, about mid way in the contrast scale. As to value of your print, not certain anyone here can answer that question, but may well know the person who can .

Thank you TankGeezer, this is exactly the information I am looking for… someone who can properly evaluate the photo.
I have not as yet posted a scan of the photo anywhere online. I don’t want to release it into the wild, as it were, until I know more about it.

This site’s censorship software apparently didn’t like the guys name either, but if you squint as it hard enough, you can make it out.

“Richard” and my dad were good friends throughout both of their careers after the war, but I have no idea where “Richard” was posted.

If any chance on good money; 1) i 'd suggest finding an american Photo auctioneer as over there they 'll probably pay better money as it is part of their heritage.
(go to Las vegas , the Pawn Shop and get on TV and say high to your british friends

)
2) what could make it insanely expensive is a PERSONAL touch; e.g. the Pilot of the B29 bomber having written something on it. Someting like “Oh My Lord, please forgive me…”.
fake of course, but it wld sell.

This image is a scan of the reverse side of the photo. Under the scribbling it says “Bombers over Japan-1945 Sent by ****.” Under that its written “Reprint by copy-No 3 paper.”:

You might be better off making enquiries of your national archives to see if it can identify your photo.