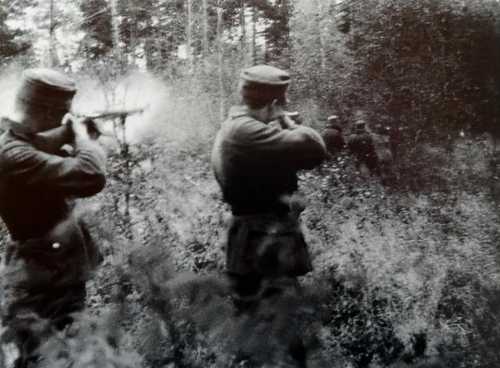 Two Finnish soldiers sentenced to death by court-martial in October 1941. It was their own wish to have their backs towards the firing squad.

This is a companion discussion topic for the original entry at https://www.ww2incolor.com/gallery/finnish-forces/48804/execution
Karabekian April 5, 2013, 12:33pm #2

In 1941 there were a few instances where men had deserted their post and refused to return.

Then there is the rather dramatic fate of Arndt Pekurinen who entirely refused military service (reason he did not accept killing) who was multiple times sentenced to prison for refusing military service. Finally in 1941 he was forcibly taken to the front, where he again refused to use his weapon (the order was to force him to use the weapon) but he refused and was subsequently shot.

Franz Jägerstätter (also spelled Jaegerstaetter in English) (20 May 1907 – 9 August 1943) (born as Franz Huber) was an Austrian conscientious objector during World War II. Jägerstätter was sentenced to death and executed for his refusal to fight for Nazi Germany. He was later declared a martyr and beatified by the Catholic Church. Jägerstätter was born in Sankt Radegund, Upper Austria, a small village between Salzburg and Braunau am Inn. He was the child of Rosalia Huber, a chambermaid, and Fr...

Pity the word “hero” isn’t used as often for these guys. Enough on both sides and the world would be a quieter place.

Actually, and at least a true pacifist.

Any further details known, such as reason for sentence?