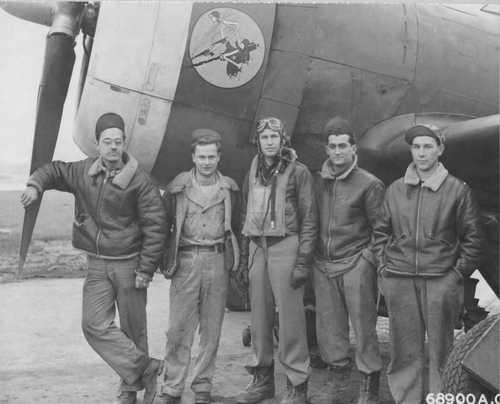 Lt. Col. Glenn E. Duncan in front of his Republic P-47D Thunderbolt that he named "Flying Death". After a dressing down by 8th Air Force brass for the poor taste of the name he sarcastically named all his later planes "Dove of Peace". He was the 353rd Fighter Group C.O. until getting shot down on July 7,1944.(rudeerude)

One person said he was a prisoner so why would we all need to do more reading.
Info from his bio on veteran tributes

Col Duncan was credited with destroying 19.5 enemy aircraft in aerial combat plus 1 probable and 7 damaged, as well as 9 on the ground while strafing enemy airfields, before ditching his aircraft in Germany in July 1944. He escaped on foot to Holland and joined the Dutch underground until he was liberated in April 1945. Duncan then rejoined the 353rd Fighter Group as its commanding officer, serving until October 1945, when he returned to the U.S
He retired from the US Airforce in Feb 1970 and passed away on July 14, 1998, he is buried at Arlington National Cemetery.

This is Col. Glenn E Duncan and ground crew standing in front of a Thunderbolt which carries his personal emblem, a skeleton pilot astride a flying machine gun. The aircraft is either P-47D-2-RE 42-7988 "Dove of Peace V" or P-47D-5-RE 42-8634 "Dove of Peace IV". All his machines were coded LH*X and carried the same name. He was shot down by FLAK on 7/7/1944 but evaded capture and was hidden by the Dutch resistance until Allied ground forces arrived in April 1945.