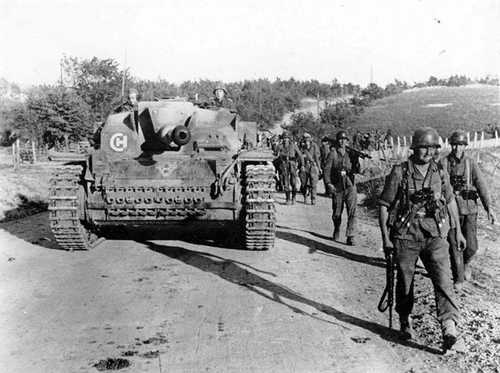 A StuG III (fully tracked armored fighting vehicle) of the Sturmgeschütz-Abteilung 210 (Assault Gun Division) and German Infantry near Novorossiysk, USSR, on the northern coast of the Black Sea; 1942

This is a companion discussion topic for the original entry at https://www.ww2incolor.com/gallery/german-armored-forces-vehicles/61430/stug-and-german-infantry
DieGrosseSchlag June 14, 2020, 6:20pm #2

This is a StuG III Ausfuehrung F identifiable by the two Notek "blackout driving lights" next to the front towing shackles, centrally mounted circular roof ventilator and the storage container on the left side of the fighting compartment. It was armed either with an L/43 or L/48 7.5 cm. StuK 40 gun. 349 were produced by Alkett from March, 1942 to September, 1942. The long barreled gun was capable of combating the Soviet T-34 and KV-1 tanks at respectable distances. These vehicles were issued to existing assault gun battalions and to the remote-control demolition vehicle detachments of the Hermann Goering Division. At this period of the war, battalions had three batteries of six guns each for a total of 18 guns.