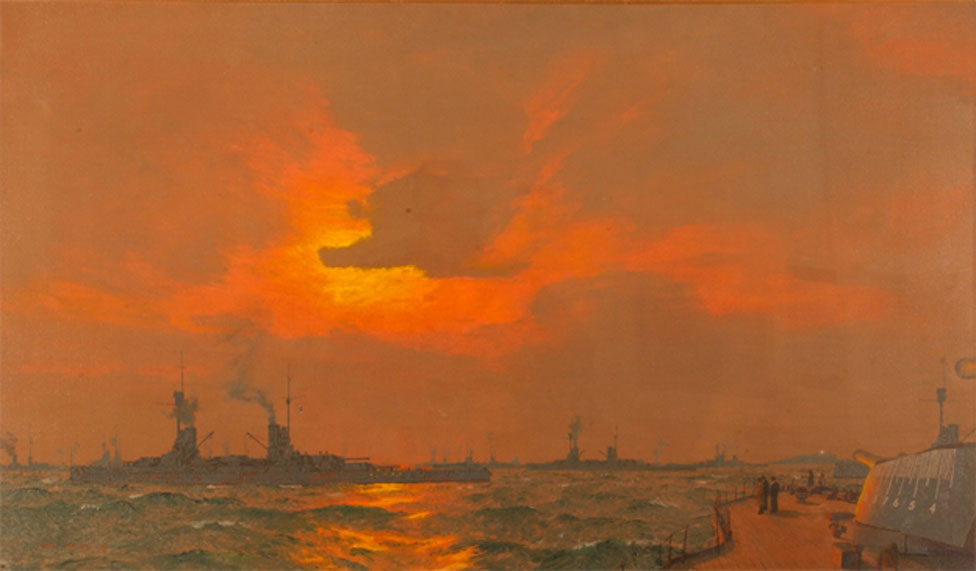 Painting of the German surrender by Charles Pears

Armistice Day is remembered as the day World War One ended, but for naval historians Britain’s greatest victory came ten days later. Operation ZZ was the code name for the surrender of Germany’s mighty navy.

For those who witnessed “Der Tag” or “The Day” it was a sight they would never forget - the greatest gathering of warships the world had ever witnessed.

It was still dark in the Firth of Forth when the mighty dreadnoughts of the Royal Navy’s Grand Fleet began to raise steam and one by one let slip their moorings.

The huge shapes of more than 40 battleships and battlecruisers began to ease out, course set due east. As the procession of steel headed for the open water of the North Sea, more than 150 cruisers and destroyers joined them. The mightiest fleet ever to sail from Britain’s shores was heading for a final rendezvous with its mortal enemy - the German High Seas Fleet.

Victory would be total. But there was to be no battle. After four years of naval stalemate, this was the day when Germany would deliver her warships into British hands, without a shot being fired.

The date was 21 November 1918. World War One had ended on land 10 days earlier, but this was to be the decisive day of victory at sea. 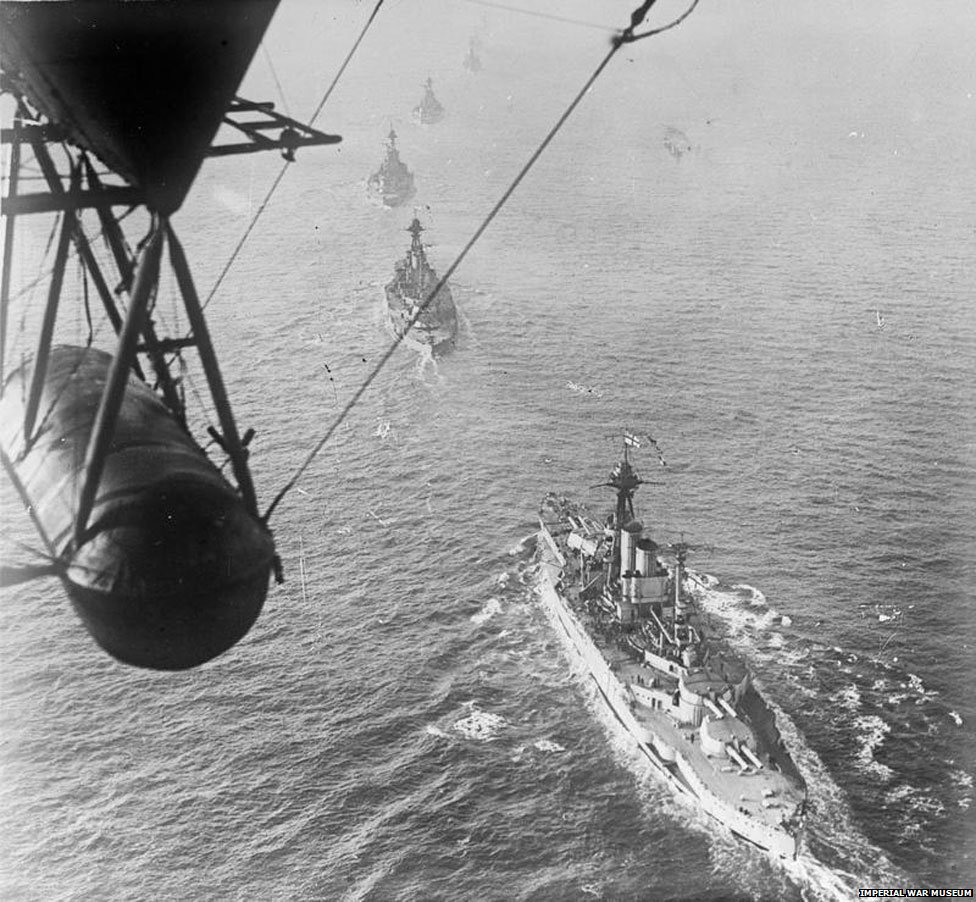 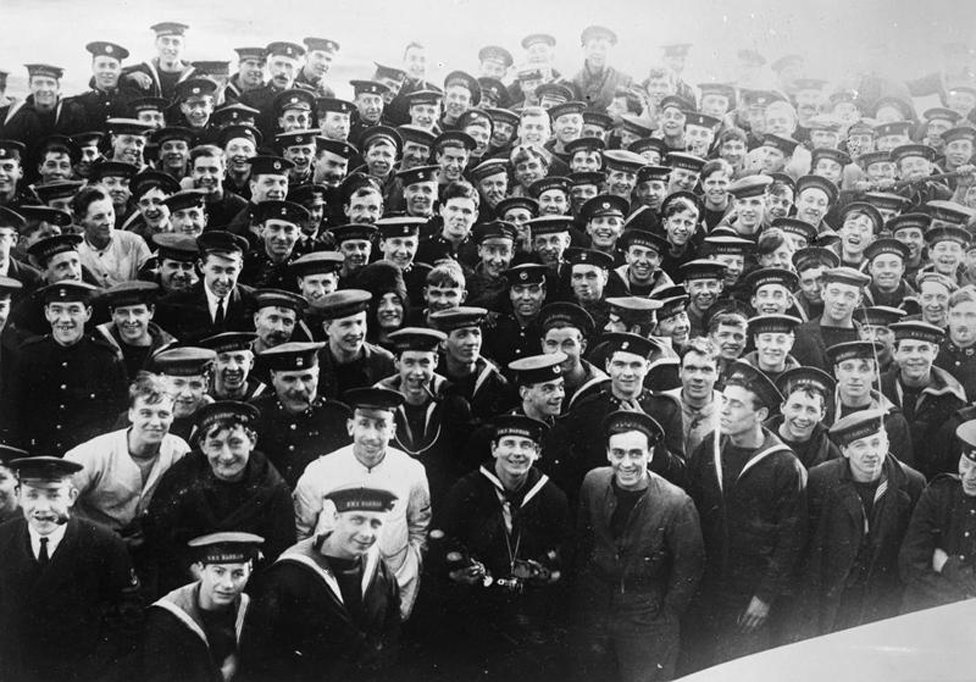 After tense negotiation, Germany had agreed to deliver its fleet - the second biggest in the world behind only the Royal Navy - into the hands of the British. The mighty assembly steaming to meet the Germans was a reception committee so overwhelming that it would brook no changes of plan.

“The Royal Navy perceived something that others did not. They wanted to underline to the Germans that they had truly been defeated, and nothing does that better than having to surrender your fleet into the enemy’s hands,” explains Andrew Choong, Curator of Ships, Plans and Historic Photographs at the National Maritime Museum in Greenwich.

Operation ZZ as it was called - or Der Tag as it was nicked-named (it means “the day” in German) saw the mightiest gathering of warships in one place on one day in naval history.

It was a sight those who saw it would never forget. The unnamed correspondent for the Times, watching from the deck of the British flagship the dreadnought HMS Queen Elizabeth, was overwhelmed:

“The annals of naval warfare hold no parallel to the memorable event which it has been my privilege to witness today. It was the passing of a whole fleet, and it marked the final and ignoble abandonment of a vainglorious challenge to the naval supremacy of Britain.”

Two days earlier nine German battleships, five battlecruisers, seven cruisers and 50 destroyers had set sail, heading west. Under the terms of the Armistice which had ended the war they were to hand themselves over in the Firth of Forth, before being brought to the lonely Orkney anchorage of Scapa Flow.
British Grand Fleet 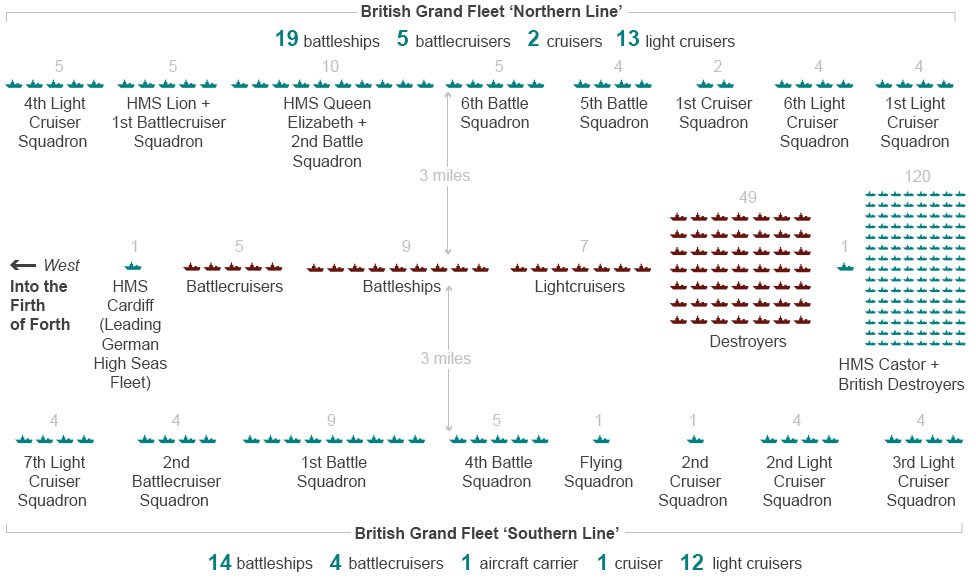 It was a fleet built to challenge Britain’s dominance at sea. Its construction had sparked a naval arms race which helped turn the two countries against one another.

As an island nation, dependent on imports to feed itself, Britain had to rule the waves. Defeat at sea by Germany could have led to blockade, possible starvation and surrender.

The commanders of the Royal Navy knew it was not an option. As Winston Churchill had said, Sir John Jellicoe, the admiral who led the Royal Navy until 1916, was “the only man on either side who could lose the war in an afternoon”.

To avoid that possibility Britain built more warships and bigger warships than Germany. Throughout the war she held an advantage of roughly two-to-one in battleships and battlecruisers. Superiority in numbers was designed to make defeat in battle impossible, and bottle-up the Germans on the other side of the North Sea.

To see more war paintings like The German Fleet at Anchor off Inchkeith, Firth of Forth: After the Surrender, 22 November 1918, by Charles Pears at the top of the page, go to BBC Your Paintings

“A lot is said about how close Germany’s U-boats came to strangling Britain in 1917, but if you turn it around, by early 1915 the seas were empty of German merchant ships,” explains Andrew Chong.

The blockade of Germany meant that by 1918 it was the Germans who were hungry, not the British. Unrest followed, then a clamour for peace. For maritime historians like Andrew Choong, the strategic defeat of Germany at sea was an even greater British contribution to victory than the battles fought on land.

“I personally think the maritime contribution was our most important one, but not in battle. It was the quieter strangulation by blockade,” he says.

As he led his fleet out of the Firth of Forth, Sir David Beatty, Jellicoe’s successor as commander-in-chief of the Grand Fleet, could count on an overwhelming superiority to forestall any final show of German defiance. As well as his ships, he was joined by five American battleships and three French warships.

Nevertheless, he was taking no chances. His orders issued the night before were clear - ships were to be ready for action: 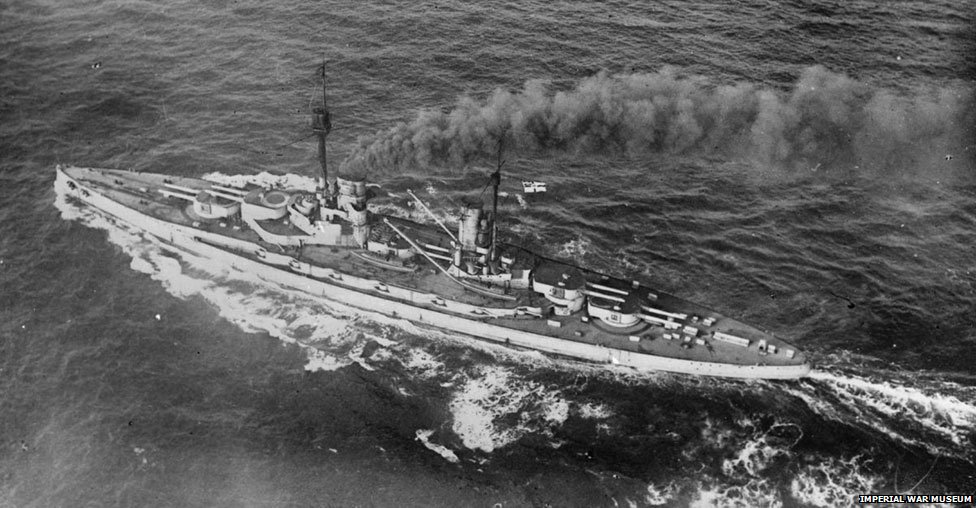 “Turrets and guns are to be kept in the securing positions, but free. Guns are to be empty with cages up and loaded ready for ramming home. Directors and armoured towers are to be trained on. Correct range and deflection are to be kept set continuously on the sights.”

As the Grand Fleet sailed into the North Sea, it formed two massive columns, one to the north, one to the south, six miles apart. Just before 10:00 it met the Germans, being led to their surrender by the British light cruiser HMS Cardiff. The Allied columns swung round to due west, forming an overwhelming escort on either side of the Germans.

The Times correspondent described the scene:

“Between the lines came the Germans, led by the Cardiff, and looking for all the world like a school of leviathans led by a minnow. Over them flew a British naval airship. First came the battlecruisers, headed by the Seydlitz.”

By late morning it was over. The German ships, missing one destroyer which had struck a mine and sunk, lay at anchor off the Isle of May in the outer reaches of the Firth of Forth, surrounded by their jailers. Beatty rammed home the message with a curt signal:

“The German flag will be hauled down at sunset today and will not be hoisted again without permission.” 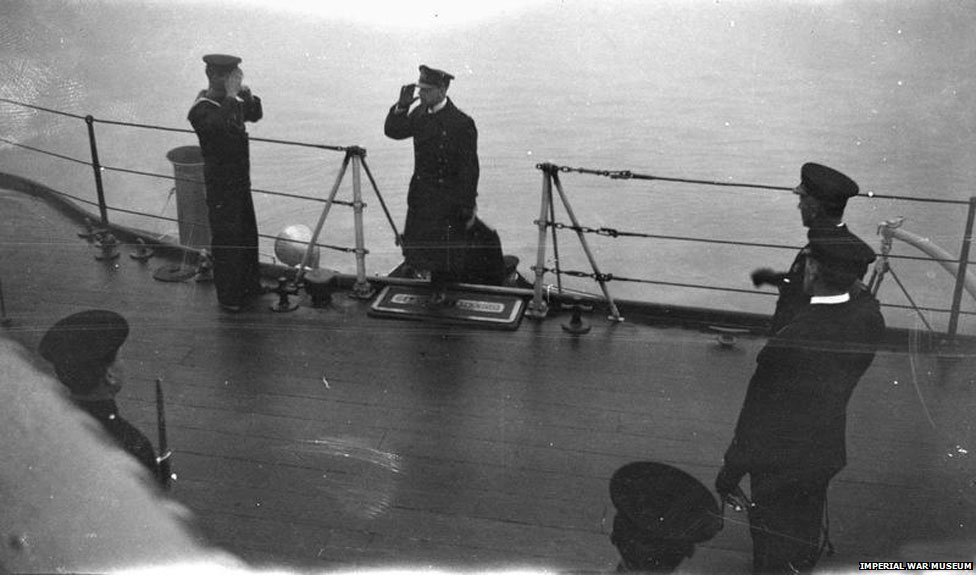 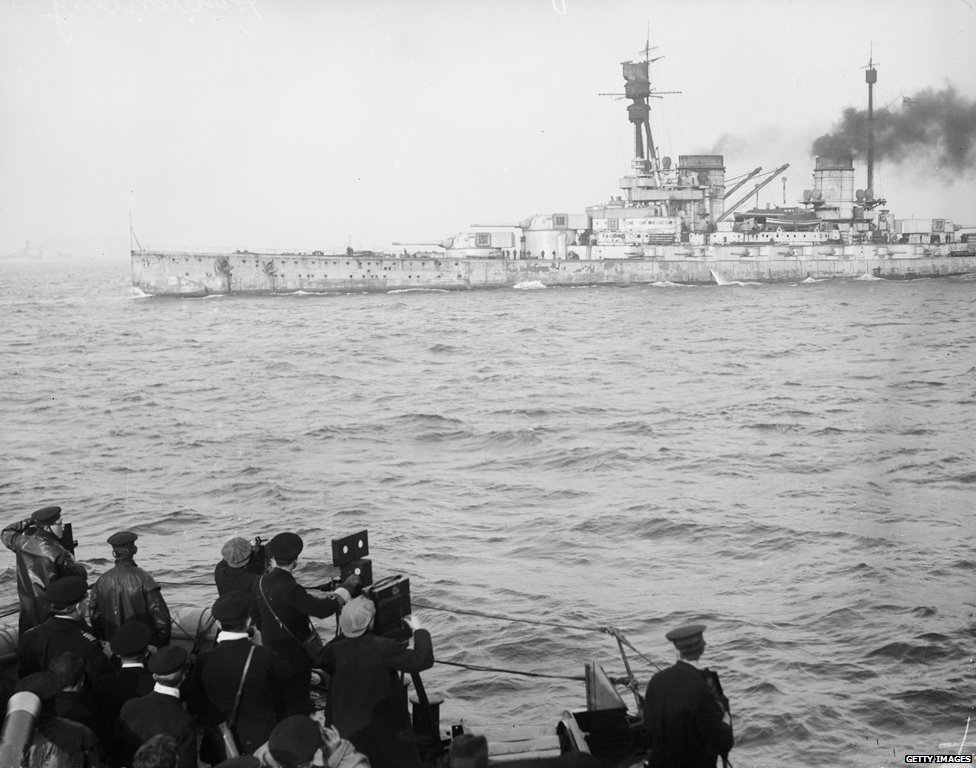 Before holding a service of thanksgiving on board HMS Queen Elizabeth, Beatty thanked the sailors of the Grand Fleet.

“My congratulations on the victory which has been gained over the sea power of our enemy. The greatest of this achievement is in no way lessened by the fact that the final episode did not take the form of a fleet action.”

The Royal Navy stood at the apex of its power. Britannia truly ruled the waves. “As of that date, Britain was still the world’s predominant naval power, and the world’s second naval power had just placed its ships in our custody,” Choong explains.

But it was not to last. Within a few months the German fleet would be at the bottom of Scapa Flow, scuttled by skeleton crews in a final act of defiance.

With no enemy left to face, and Britain desperate to slash military budgets, the Royal Navy could not justify the expense of its massive ships.

“The majority were scrapped between the 1920s and the early 1930s. A handful of the most capable went on to serve in World War Two,” explains Choong.

At least one of the British battleships, HMS Hercules, was towed across the North Sea to meet her fate in a breakers yard in the German naval port of Kiel.

But as darkness fell on 21 November 1918 that was still in future. As buglers played “making sunset”, cheers rang out from the sailors of the Grand Fleet. The Times correspondent knew he had witnessed something a unique spectacle.

“The plan of the operation will not convey to the mind any conception of the scene, but it must be placed on permanent record, for it indicates a disposition of hostile fleets such as has never been seen before and will in all likelihood never be seen again.”

Which, judging by the faces looking up, are going to arrive by air.

That would have been something to see.