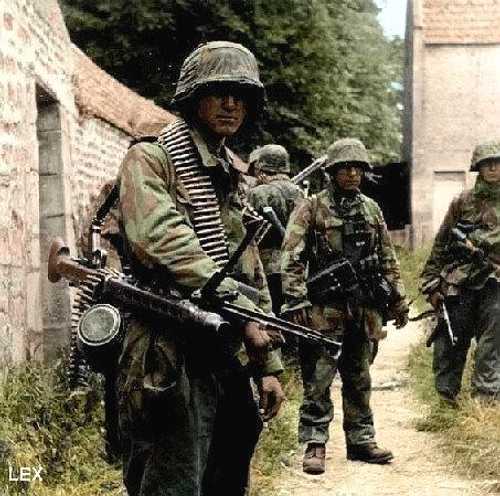 This is a companion discussion topic for the original entry at https://www.ww2incolor.com/gallery/colorizations/21037/12th-ss-in-normandy
flamethrowerguy November 8, 2008, 11:13am #2

Thank you for colorizing this one, Lex, it’s one of my absolute favourites. But…Italians? No, seriously. You might have been fooled by the italian camo pattern of their uniforms, this was all captured material used for german troops. The soldiers belong to the 1st battalion/SS-Panzergrenadier-Regiment 26 of the 12th SS-Panzer-Division “Hitlerjugend” and the photo was taken by SS war corrspondent Zschäkel in June 1944 in Normandy.

I am inclined to believe they were Germans as well, but I’ll point out there were also Italian SS units, certainly after the Italians switched sides, if not before. I know such units received at least some German gear – but I don’t know if it went so far as to include helmets, etc!

Ardee, the “29th Waffen-Grenadier-Division der SS” was an italian volunteer unit. They had common Waffen-SS uniforms but italian helmets with the SS-decals. It’s written that parts of the unit fought with good success against the western alliws at the Nettuno front and later against italian communist partisans in Northern Italy until the division surrendered to the US forces in Gorgonzola (the town, not the cheese) on April 30, 1945.

Hey, thanks again FTG. I assume they were under the authority of the party, and not, say, the RSI government?