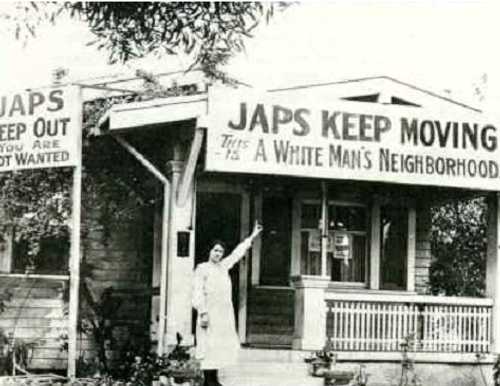 An American woman showcases her sign, clearly indicating that "Japs" are not welcome in her "white neighborhood."

Are you implying that, simply because this photo shows a possibly controversial subject, it should not be posted here? Did I make anti-American comments in the caption? Can you find anything here that strays away from simple neutrality?

I don’t know, but it seems almost as though you are attempting to censor what photos I can post. I hope this is not the case. I see no reason why this image should not have been posted, as it shows a good example of the general American attitude during the war, and gives us another insight into the Homefront side of things.

Also, if you will bother to check, you will see that I have posted a good deal many other photos that have nothing whatsoever to do with America or discrimination. I fail to see why I should not post certain pictures just because they may not "get an 100% approval rating."

If anything, the community here should be mature enough to look at these photos for their historical significance, and not as an attack on any one country or people. I believe that your referring to my posting a grand total of, I think, three (quote) "anti-American" images as a "crusade" is highly unfair and unkind.

i do support MongolSpirit. I did never see such interesting photos before. It’s not anti-american. ThThe prejudices including racial, ethnic and caltural are/were common for the all sides during all the wars. Nothing special or personal about that.Otherwise we should close this site coz its anti-german, anti-japane and anti-anybody else.

The images on their own are of no concern, they are part of real History. Its when they are made into shrines to some crazed ideology, or someone uses them to "worship" in some fanboi way that they become unacceptable, and are removed. I hope this settles matters.