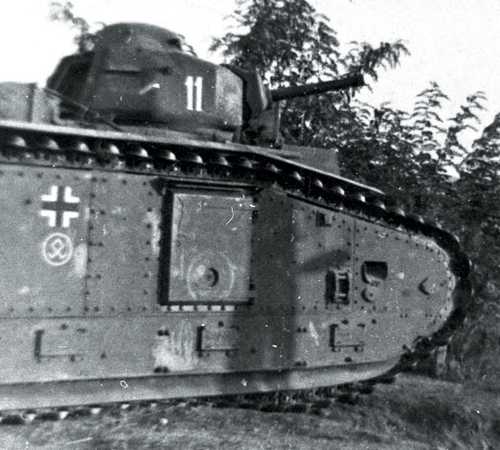 Far from Paris - somewhere in the Balkans.

The 7th SS Volunteer Mountain Division, "Prinz Eugen" was highly regarded among SS antipartisan units, but performed poorly when pitted against frontline Soviet units toward the end of the war. Part of the reason for this lay in its particular training. Another reason was its heavy equipment, which was in short supply, often captured non-German and (in consequence) not always state-of-the-art, or appropriate to the Division's needs. This appears to be an example - a French-built Char-B. Apart from the Balkenkruez, note the Odal/Othala ("family/kinship/brotherhood") rune, emblem of "Prinz Eugen" on the side of the tank. The Division was assigned a number of different types of captured French tanks. Some were undoubtedly useful for mountain division operations; but is is hard to imagine that this slow, unreliable, obsolete type was terribly easy to use in the conditions of the Balkans. Best regards, JR.

This is a companion discussion topic for the original entry at https://www.ww2incolor.com/gallery/german-armored-forces-vehicles/36906/far-from-paris-somewhere-in-the-balkans.
Nickdfresh January 24, 2011, 10:35pm #2

I don’t believe the Germans ever mounted significant gun upgrades on their ‘beutepanzers.’ I know some Char B’s were modified as flamethrower tanks. Most French origin panzers (The ones not converted to other purposes) were sent to Yugoslavia, used as internal security patrol vehicles, sent to the (French) coast as expendable cannon fodder in an Allied invasion. I know a couple of Char-B’s were station on islands the Germans captured in the Channel as well. Italy also received a number for use on Sicily…

From the Axis history forum.

The first units equipped with B2 flame tanks were the 7th companies of Pz.Rgt.201 and 202, which were regrouped in 1941 in Pz.Abt.102 and engaged on the eastern front. Char B2(f) and B2(f) flame tanks were used during Barbarossa to reduce and destroy Russian fortifications in the summer of 1941. Pz.Abt.213 was later equipped with B2 tanks and stationed in French islands in the Channel.
Pz.Abt.206 was formed in November 1941 at Satory (near Paris), this battalion was used as a reserve unit for the 7.Armee. Wedged in Cherbourg, this unit was destroyed there. Its composition in beginning 1944 included 2 companies of 10 Hotchkiss H39 and 4 Somua S35s (in each company) and one “Stab Kompanie” of 3 Renault B2, 3 Renault B2 flamethrower, 2 Somua S35 and 2 Renault R35. Many such small units were formed with French booty/converted tanks like the Pz.Abt.100 committed to 91.ID in Normandy in 1944 (1 Somua S35, 8 Hotchkiss H39, 14 Renault R35, 1 Flammenwerferpanzer Renault B2, 1 PzIII and 5 FT17c) and the 21. Pz.D. included many French tanks.
Pz.Abt.223 was formed (attached to 22.PzD) with Char B2 flame tanks and was engaged in battles near Sevastopol in 1942. This unit was then expanded to include 2 panzer companies and command elements with a second company composed of 5 B2 and 12 B2 (Fl = flamethrower).
Different other units were also equipped with B2(f) tanks : Pz.Abt.224 in the Netherlands (engaged in Arnhem and Oosterbeek in 1944), two companies of the Pz.Rgt.100 in France and one company of 17 B2 from SS Pz.Abt.7 (SS ‘Prinz Eugen’ division) in the Balkans. In February 1945, 40 B2(f) tanks were still in service in the German army. Late war B2(f) had sometimes a kind of Zimmerit/concrete on their armor, at least on the turret. The B2(f) Flammpanzer could fire about 200x 2-3 seconds “napalm” shots. The French troops reused several B1bis captured in France, especially against German pockets on the western coast.

Hi, very fair minded to say that the reason for poor performace against Soviet front line divisions is due to the Prinz Eugen never having been intended for this task. I have read too many comments (not necessarily here of course) that put this down to poor quality of the men themselves, which is unfair I think.
You need guts to take part in anti-partisan warfare, hence the special medal the Nazis minted for it.

Did the Germans ever try to update the original guns with their own later models?