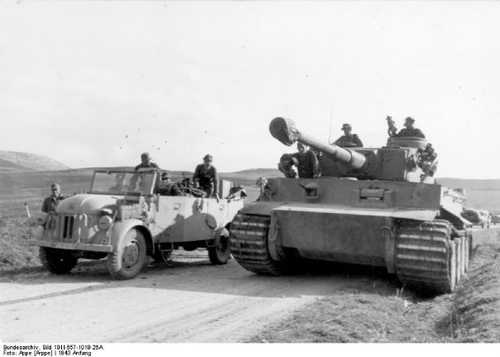 Field car and Tiger I schwere.Panzer-Abteilung 501

This is a companion discussion topic for the original entry at https://www.ww2incolor.com/gallery/german-armored-forces-vehicles/35836/field-car-and-tiger-i-schwere.panzer-abteilung-501
Evillittlekenny November 27, 2010, 1:36pm #2

I don’t know why, and I might be very wrong with this assumption, but I think the car is a pre-war German model. Does anyone know for sure?

Why does the caption say "Tunis"? Tunis is the capital city. Does this look like a city?

The photo is from the morning of 26 February 1943. The event is the launch of Operation Ochsenkopf. The Tiger is “131” of 7 company Panzer Regiment 7, 10 Panzer Division, 5th Panzer Army.
In the car is Major Lueder, commanding this battle group.
A few kilometers ahead the whole operation will be stalled at Sidi N’sir.

The original caption in German: