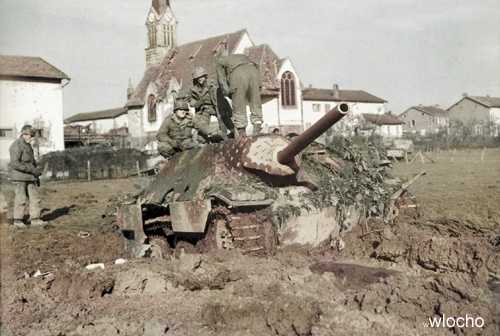 My Uncle worked with a man who refurbished battle damaged US tanks during World War Two.

He said often the smell of death was impossible to get rid of. The repainted the interiors but it was still there.

Sometimes they had to cut the bodies apart because they had been in the tank too long and were now too big to get out in one piece.

New Tank crews did not like getting one of these tanks. Some how the smell was still there and it was considered bad luck to use a tank some crew died in.

This man still had nightmares of some of the things they found in the recovered tanks.

The smell of "death" is caused by the presence of 2 compounds, cadaverine and putrescine, both are the end product of the breakdown of amino-acids. As flesh decays the vapour pressure of the putrescine in it becomes sufficiently large to allow its odour to be detected, cadaverine occurs in a liquid form with the same foul smell. The smell is very dificult to get rid of because both compounds aquire a very stable structure, so it takes a long time for them to degrade or be degraded by bacteria…Cheers

great picture ! what became all the destroyed tank after ww2 ? this tank would be a nice piece of museum!

In Kurt "Panzer" Meyers biography "Grenadiers". Meyer writes that he once on the eastern front looked in to a destroyed T-34, and the sight that met him, gave him nightmares for several weeks to come… At the time Meyer allready was a battle hardened veteran who had seen hes share of death and brutality…

Wlocho, you’ve outdone yourself. That looks amazing. <br />
I’m really impressed at the attention to detail for the ground. That’s usually my greatest weakness.