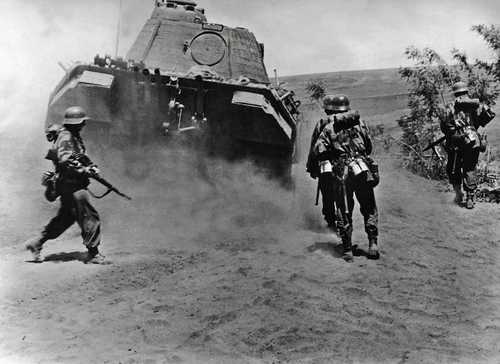 1944, the Eastern Front. A "Panther" and Panzer-Grenadiers of the "Großdeutschland" division. Probably in Romania, 1944. komandos10

I was reading that this was a crack division that was originally organized in 1870 as the "Berlin Guard". I believe that is the correct name. Adolph Hitler renamed it the "Grossdeutschland Division" to promote that it was compiled from many different German Speaking areas. I suppose he was promoting his idea of "diversity". It had a good reputation and was counted on to take care of the hard jobs.

I would say…:
<br />
<br />
-they were experts,specialists.Each battle with them was like a masterpiece.Tough job for them didn’t exist.I feel a real respect towards them as well as other German formation.I love my own forces,but I’m really impressed by the Germans.

Texag57, you’re misinformed. The unit that was to become the Grossdeutschland Division, <i>Wachregiment Berlin</i> (Guard Regiment Berlin), was originally formed in early 1921 to protect the Weimar Republic (or, more accurately, the capital) from the threat of both Fascists and Communists. <br /><br />
In June of the same year, it was disbanded and recreated as the <i>Kommando der Wachtruppe</i> (Command of the Guard Troops), with the same function but increased size.<br />
This Guard Troop now drew one company from each of Germany’s seven divisions, turning it into a demographic representation of the entire <i>Reichswehr</i> of the time. <br /><br />
After the Nazi-takeover, it was renamed to <i>Wachtruppe Berlin</i> in 1934, then in 1937 it was returned to its original name of <i>Wachregiment Berlin</i>. <br />
It wasn’t until the first week of 1939 that this regiment was renamed to be the <i>Infantrieregiment Grossdeutschland</i>, from which point on it had a permanent cadre of troops drawn from all over Germany, unlike other German Heer regiments which would draw recruits from specific regions. <br /><br />

On a side note: Despite the SS’s role as Hitler’s bodyguard, his actual private bodyguards were drawn from <i>Grossdeutschland</i>, the so-called <i>Fuehrer Begleit</i>. This was done as a favor to the Heer command, as it demanded to provide the personal guard to the Leader of Germany, as it had historically always done.