I have a few Mosin Nagant rifles and pictures to share

Any requests for pictures I will try to fill if I have them. Finn and Russian rifles interest me so please share if can.

I had two of these rifles about 10 years ago. A gun shop in Mena, Arkansas was selling them for around $50 each and they sold a “sporterized” nylon stock for them as well. They were popular with the hunters and shot very well.

Some more Finn’s, these are not the $49.99 but real collectores with perfect bores. But I do remember back in the day when they were cheap but everything was cheap yesterday. LOL.

My recollection is that back in the early 1960s we could buy war surplus .303 Lee Enfields for about 30 shillings (jungle carbines cost more) which equals three dollars now. On current exchange rates equals a bit less than three US dollars. The ammunition was ridiculously cheap at the time, as were other useful military surplus items like aircraft landing lights which made great spotlights for spotlighting (shooting at night), if you could get a big enough battery and carry it.

That would all come under British arms.

I wants a Cossack Mosin.

No Cossack but a 1916 recevier rebuilt bby the Finn’s and issued in 1944 with matching bayonet.

I’ve got a Mosin rifle made in Tula in 1940. I bought it in 2008 for $75.00. This price included the bayonet, sling, oiling can, and cartridge pouch. It came looking new, having undergone an arsenal overhaul at some point. What I’ve heard is that the parts are not original to the gun, but had new serial numbers electro penciled on them so that they all match. It seems to me that when I shoot it it is more accurate with old surplus ammo than modern non-corrosive stuff, too bad.

I’ve got a Mosin rifle made in Tula in 1940. I bought it in 2008 for $75.00. This price included the bayonet, sling, oiling can, and cartridge pouch. It came looking new, having undergone an arsenal overhaul at some point. What I’ve heard is that the parts are not original to the gun, but had new serial numbers electro penciled on them so that they all match. It seems to me that when I shoot it it is more accurate with old surplus ammo than modern non-corrosive stuff, too bad. My brother in law liked mine so much that he got one too. Spent a little more to get one with a laminated stock, then he went and sporterized it!! 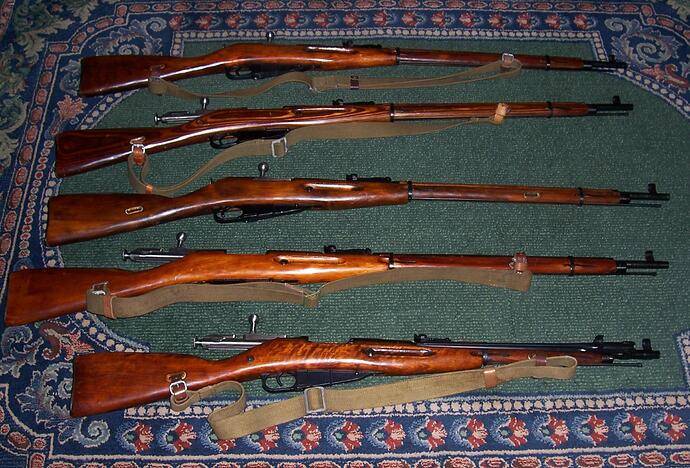 I’m not sure where the prices are today with the Nagant, but IMHO they are the best value for the dollar for military rifles right now. I bought six of them, the last one three years ago, and like most things Russian they are rugged, simple, reliable and very functional.

Some posters on the internet say the accuracy from the Nagant is terrible, but if that is the case I hit the mother load as all six of mine can hit a paper plate with ease at 100 yards, if I do my part. The bores from each vary from ok to good, these are 70 plus year old rifles using corrosive ammunition it is to be expected that the bores won’t be perfect, but they can very good.

I will say the M44 does seem to have considerably more felt recoil than any of my other bolt action military actions, I have never fired a Enfield Jungle #5 which I have heard is very stout.

I have ran into the issues with accuracy concerning surplus vs new ammo on a few of the old shooters, I try different brands until I find one that suits the rifle, I really should reload my own ammo for this fact alone. I have one Nagant that I have scouted scoped that isn’t shown on the photo above.

Bore condition is a big variable in those Rifles, usually though the crown is battered, and the muzzle end rifling is damaged from use, or hasty cleaning. (who ever cleaned them? ) To repair these conditions, the muzzles were counter bored to get back to intact rifling. This will help a great deal to return the rifle to its normal very accurate performance.
The Enfield No. 5 Mk. 1 Jungle Carbine was my first rifle, It looked every bit of its age, but even so, it shot very well, and repeatably so despite the stories of them being unable to hold a zero. The recoil came from its reduced weight, about 2 lbs less then the Mk.4 it derives from. It has the same twist rate of the Mk. 4, 1 turn in 10 inches. (though for some reason they used a left hand twist.) Twist rates were determined according to the bullet weight of the service ammo.
Loading your own ammo will give you much increased performance through eliminating, or at least limiting variables in powder charge weights, bullet weights. case length, and primer pocket uniformity. Then test by incrementally increasing the powder charge within the safe pressure range to find the sweet spot for the individual rifle. This can vary even between rifles of the same make, model, and production run. You won’t in this case save any money by loading, as surplus ammo is still really inexpensive. But the rifle will shoot as well as it is capable of. This video will show just how good the Mosin Nagant can be. http://youtu.be/a-CTa2lMGN0

Wittman
A nice looking collection.:mrgreen: Prices seem to start at around $125 these days. Still not too expensive.

I have one Russian capture K98K 1943 DOT that is counter bored with a very strong bore and a 1938 K98K BSW with a strong bore that isn’t counter bored and both are very accurate. It seems like your eyesight is the limiting factor with those two, I guess the same could said about the Nagant .

Not to change the subject but I still think my most accurate military surplus rifle, for me, is the M1 Garand and I will say that aging eyes on v-notch sites that are on the Nagant and K98K are more difficult for me to focus on as compared to the peep sites on the M1 and 03A3, not the rifles fault. I also would like to try the mad minute with the Enfield, I know that the rifle is capable.