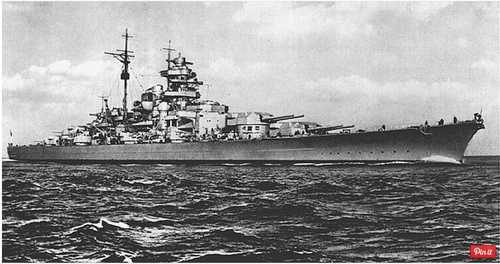 THE PRIDE OF THE KREIGSMARINE AND THE TERROR OF THE SEAS.... THE BISMARCK!!!

This is a companion discussion topic for the original entry at https://www.ww2incolor.com/gallery/german-navy/61458/kms-bismarck
DieGrosseSchlag June 25, 2020, 5:41pm #2

In reality the Bismarck was fairly conventional in layout and at best, equal to contemporary US and British battleship in terms of main gun firepower - eight 15-inch guns compared to 14, 15 and 16-inch guns on US and British ships. In automatic antiaircraft guns, the Bismarck was at a disadvantage It’s twin 37 mm. guns were manually loaded, single shot and it had only a few automatic 20 mm. guns. In comparison US and British battleships had a greater quantity of guns (40 mm. and 20 mm.) and all were automatic. The Bismarck’s modest number/type of guns along with insufficient AA gun crew training, ultimately led to its demise as seen in the Swordfish torpedo-bomber attack.