M-1 an M-2 Carbines in Korea and WWII

We are volunteer at the Korean War Veterans Memorial in DC and need some clarification on information passed along by visiting Vets, we want to make sure our info is correct.

Were both M-1(semi auto) and M-2 (selective fire) carbines used during the Korean War? Was there anything particular distinguishing about the M-2 Carbine, did it use a banana clip? Were the magazines interchangeable?

One odd feature was pointed out to me by a jarhead…excuse me a Marine, he had been to the Marine Corps Memorial and then came to the Korean Memorial. He pointed out to us that the Carbines depicted on the Marines Memorial had “bayonet clips” and that the carbines depicted at the Korean Memorial did not show these clips. According to him, the “bayonet clip” was a retrofit about 1945.
Which would mean the Marines at Iwo (2/45) would not have this retro and that the troops in Korean would have!

I’m not a firearms expert by any means. But I’m under the impression that the M-2 Carbine would have been the prototypical weapon being issued not only to replace the M-1 Carbine, but the Thompson submachine-gun as well, during the Korean War era. There may have been some left over M-1 Carbines, especially around the beginning during the “Task Force Smith” days. But I’ve never seen a photo nor heard of their use in Korea. There is also a distinctive possibility that some M-1 Carbines were used by the Chinese PLA “Volunteers”. In fact, variants of the Thompson submachine-gun were issued to the Red Chinese and many were captured and used by the U.S. military. I suppose it’s possible the same thing happened with Carbines sent to the Nationalists that could have been captured by the PLA and issued. But I am unaware of any instance of this…

Note how confusing the nomenclatures are as no one is sure if this is an M-1 or a true M-2 with cyclic capability. It may well have been captured from Chinese forces… 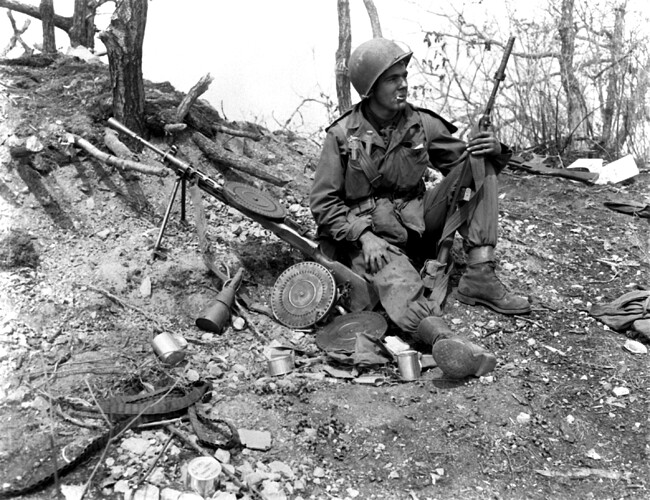 Externally, there is little to identify the M-2 from the M-1, aside from the add-on Bayonet lug added by the end of WW II,no specific date mentioned which might be found on either version, only the selector switch truly decides the matter. The Switch is on the left side of the Receiver, near the front ring (where the barrel screws in) The magazines were usable in either version, 15 or 30 round. The rate of fire was sufficient to suppress the enemy, and over all, it was a good weapon. The only drawbacks were that with its not too powerful cartridge, effective range was limited to under 300 yards. This mostly due to the very light bullet used (.2 ounces)in a very light, essentially a Pistol cartridge. This would be aggravated in the freezing Winter weather, shortening the range even further.
Here is a cut&paste from an article in the American Rifleman magazine," Arms of the Chosin Few" (by Bruce Canfield, 2010) and speaks of the M-2 (and M-1) used in Korea. The attached image shows the selector switch of the M-2. Don’t know if this will answer your questions very well, but it’s something.

"U.S .30 Caliber Carbine
Of all the primary U.S. small arms of the era, the M2 carbine proved to be the most problematic during the fighting at Chosin. The carbine was adopted in late 1941 to replace the pistol in the hands of officers and other personnel whose primary duties precluded carrying the standard M1 Garand service rifle. The trim little semi-automatic carbine was much lighter and compact than the Garand (approximately 5 pounds vs. 9½ pounds) and used a 15- or 30-round detachable box magazine, as opposed to the M1 rifle’s eight-round en-bloc clip. To achieve this weight reduction, the carbine fired a .30-cal. cartridge that was much less powerful than the .30-’06 Sprg. cartridge fired by the M1 rifle. Since the carbine was originally intended to replace the .45 pistol, the reduced range, accuracy and “stopping power” were not considered detrimental. During World War II, however, the carbine was often used in place of a full-power service rifle (something it was not designed to do), and the carbine’s deficiencies when used in this manner soon became evident.

To increase the carbine’s firepower, a selective-fire version of the .30-cal. M1 carbine was adopted as the “M2” carbine and first issued in late World War II. During the post-war period, many standard M1 carbines were converted to M2 configuration by means of a simple kit. By the time of the Korean War in 1950, the M2 was the predominate version of the carbine in service, and many soldiers and Marines carried it in lieu of the heavier, but more effective, M1 rifle. Throughout much of the Korean War in general, and the Chosin campaign in particular, the carbine was often looked upon with disfavor for its failure to provide adequate “stopping power” and for the frequency of its malfunctions in inclement weather.

A 1st lieutenant in the 1st Marines, Joseph Fisher, made the following statement regarding the carbines in his unit during the Chosin fighting: “About 30 percent of our carbines gave us trouble; some wouldn’t fire at all [and] others responded sluggishly. But the main reason my men lost confidence in the carbine was because they would put a bullet right in a Chi-Com’s chest at 25 yards range, and he wouldn’t stop. This happened to me. The bullet struck home; the man simply winced and kept on coming. There were about half a dozen of my men who made this same complaint; some of them swore they had fired three or four times, hit the man each time, and still not stopped him.”

Such complaints were typical of those lodged against the M2 carbine in Korea. In some cases, the soldier or Marine may have believed he hit his target but actually missed and erroneously blamed the carbine. In other cases, if our troops had been armed with .45 pistols rather than carbines, one might wonder how many of the enemy would not have been touched at all. Other Marines held their carbines in higher esteem, but they were in the definite minority. In any event, it cannot be denied that the carbine did not perform up to expectations during the Chosin campaign. Despite its light weight and rapid-firing capability, the carbine was one of the more unpopular arms of the conflict due to the relative ineffectiveness of its cartridge and its propensity to malfunction under even marginal weather conditions." 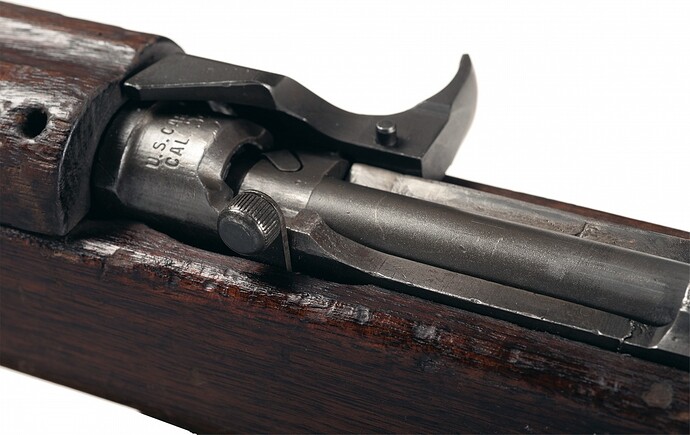 The M1 Carbine can be tricky to date due to various changes it had during its service and when these changes were put into effect such as flip sight vs elevated, flat bolt vs round, high wood vs low vs m2 stock, type 1-2 or 3 barrel band and etc. Most of the changes don’t seem like much, but the guys that have spent time around them will know.

One great source of information is Bruce N Canfield, he has written several books on US Infantry firearms including the M1 Carbine, http://www.brucecanfield.com/books.html I would just contact him directly, as I’m sure he would be glad to help.

Another good book is

It has detail on the various modifications and approximate serial number the updates were made at.