The latest Abrams variant is an upgrade package, the M1A2SEP V3. Many of its features are practical rather than sexy: upgraded computers, and a new Auxiliary Power Unit (APU) that allows the Abrams to keep its sophisticated systems running while the engine is off, improving the fuel efficiency of the Abram’s notoriously thirsty turbine engines. Maintainability is improved with modular, replaceable cabling.

Back in the 1990s I recall reading Tom Clancy’s loving paean to the M1 Abrams, Armored Cav, in which he related that the unkillable tank had never been knocked out by hostile fire. The Abrams’ 120mm cannon effortlessly peeled the turrets off of T-72 tanks in the Gulf War, while Russian anti-tank missiles and 125mm shells couldn’t pierce the American tank’s Chobham armor. In fact, the Abram’s own gun reportedly struggled to penetrate the Abram’s depleted uranium armor.

Since then the Abrams has been involved in a lot more war, and it has had to forsake its invincible reputation. During the U.S. invasion and occupation of Iraq, several were knocked out by massive IEDs or RPGs in the vulnerable rear armor, others by advanced Russian-made anti-tank missiles such as the AT-14 Kornet. In the ongoing conflicts in Yemen and Iraq, dozens of Saudi and Iraqi Abrams have been taken out by such missiles.

The Abrams also hasn’t encountered modern tanks. In fact, the Abrams is hardly unrivaled in its (very heavy) weight class: other vehicles such as the German Leopard 2, the British Challenger 2, the French Leclerc, and Israeli Merkava 4 possess similar firepower and protection levels, though of course each type has its advantages and disadvantages.) However, none of them were likely to ever be shooting at an Abrams, so it wasn’t a problem. 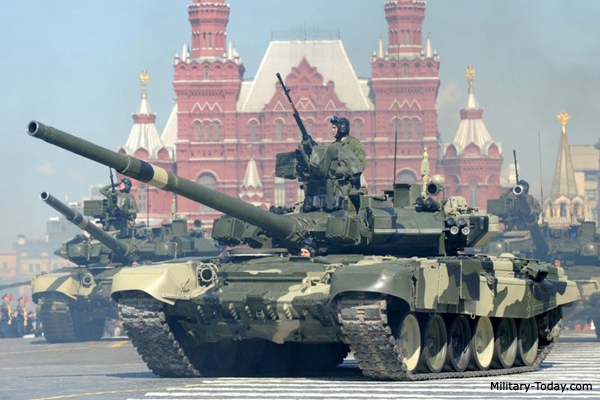 For decades, the most threatening potential opponent was the Russian T-90 tank—a vehicle which has a fighting chance against the Abrams, but is hardly a peer.

Russia’s new T-14 Armata tank finally does present a peer challenge to the Abrams. While the Abrams still appears to have a slight edge in conventional armor, the Armata compensates with a combination of explosive-reactive armor and a sophisticated radar-guided Afganit Active Protection System (APS) intended to shoot down incoming projectiles. The T-14’s new 2A82 125mm also has improved armor penetration, meaning the Abrams’s frontal armor may be vulnerable at shorter combat ranges (possibly 1,500 meters and less).

While it’s still debatable which is the superior tank—they clearly both are capable of destroying one other—the point is that the Abrams can no longer assume the inferiority of opposing tanks.

Another thing they used to say in the 90s was “The Army doesn’t do cities.”

During the U.S. invasion and occupation of Iraq, which involved a gazillion Military Operations in Urban Terrain, a Tank Urban Survival Kit (TUSK) was rushed into service with a number of upgrades to cope with potential ambushes from any direction. Many of those upgrades have been standardized in later Abrams, including improved belly armor, a Crew Remotely Operated Weapons Station (CROWS)—basically, a remote-controlled .50 caliber machine gun so that the crew isn’t exposed when firing—and add-on Explosive Reactive Armor (ERA) to the vulnerable sides of the turret.

The U.S. Army had long eschewed ERA, as it can wound nearby friendly infantry and can get “used up”; however, it served as a relatively lightweight and inexpensive means of defending the Abram’s vulnerable side armor from concealed enemy rocket-propelled grenade teams.

The latest Abrams variant is an upgrade package, the M1A2 SEP V3. Many of its features are practical rather than sexy: upgraded computers, and a new Auxiliary Power Unit (APU) that allows the Abrams to keep its sophisticated systems running while the engine is off, improving the fuel efficiency of the Abram’s notoriously thirsty turbine engines. Maintainability is improved with modular, replaceable cabling.

Finally—and possibly, most importantly—the M1’s depleted uranium armor package has been improved. How much, you ask? The Defense Department sure ain’t telling! ERA, however, does not appear in the default package. A jammer for disabling wireless IEDs has also been installed.

A number of the most important upgrades to the Abram’s capability maybe come independently from the SEP V3 upgrade package.

The first already began entering service in 2015: the M829A4 Armor Piercing Fin-Stabilized Discarding Sabot shell, the latest ammunition type for the Abram’s 120mm M256 cannon. The M829A4 has a segmented depleted uranium penetrator, and has been specially designed to defeat the Relikt explosive reactive armor on the latest Russian tanks, including the T-14 Armata. Future improvements to the Abram’s firepower are likely to come by improving the capabilities of munitions, as they are easier to upgrade and replace than the main guns.

Another innovation, Active Protection Systems (APS), have the potential to revolutionize tank defenses—the best combine ‘soft kill’ measures that obscure the tank and mislead guided missiles, as well as ‘hard kill’ measures that literally shoot down incoming projectiles. These are generally most effective against missiles, though theoretically may be effective against tank shells; the M829A4 shell is supposedly designed to overcome them.

The Israeli Trophy APS has a proven record shooting down deadly anti-tank missiles in recent conflicts. The United States military has attempted to develop its own indigenous system—but recently, the Army and Marines began testing Trophy on M1A2 tanks. Trophy can basically be purchased “off the shelf” and installed relatively quickly, so if the Defense Department decides the Abrams needs the capability, it could pursue the upgrade relatively quickly.

Another upgrade that could be installed quickly if desired would be a Laser Warning Receiver (LWR). An LWR would notify the Abram’s crew if their vehicle was being painted by an enemy laser-range finders and guidance systems—giving the crew an opportunity to hit the reverse pedal and back the tank out of danger.

It should be stressed there are no definitive plans to install the latter two technologies in the SEP V3 Abrams. However they are obvious upgrades that could be implemented quickly and at reasonable cost.

The Army is currently planning to develop a more radical upgraded Abrams by 2020, the M1A3. Details are sketchy, but reducing the Abram’s roughly seventy-ton weight appears to be one of the priorities. Certainly, weight has limited the ability to deploy the Abrams around the world and restricted which bridges it can cross. Features specifically mentioned include a lighter-weight gun, replacing the wiring with fiber-optic cables to shave off two tons of weight, improved suspension, and adding a Laser Warning Receiver. Other improvements are doubtlessly being considered, but specifics are lacking for now.

This first appeared in August 2016 and is being reposted in The National Interest.

Cool, nice read. I know that Armored Warfare has speculated on a gun upgrade for most modern MBTs to 140mm, but I’m glad that it isn’t in the article as I find it a bit silly.

I occasionally see articles concerning replacing the Turbine pack with an equally powerful (in HP) Diesel pack. I find it difficult to say no to a Diesel engine for the Abrams, as it would much increase the range of the vehicle, and can even burn different fuels with adjustments. The present Turbine can burn any type of fuel with out any changes which is a big plus, but not enough to outweigh its thirsty nature.
I believe it is also time to develop new munitions to more effectively deal with the newer type of armor, and active protection systems like Israel’s Trophy system. Perhaps some “smart” munitions can be developed, and employed to allow the Crews to more effectively engage a greater number of threat vehicles at one time.