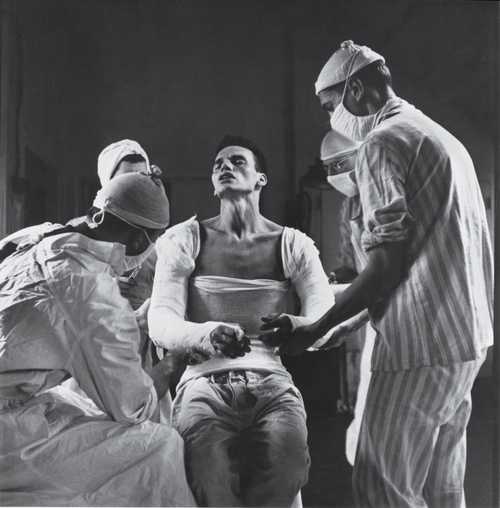 U.S. Army medic George Lott was wounded in November of 1944. Here, his wounds in both arms set in casts at the beginning of a painful journey that would see him travel over 4,500 miles for medical care in the continental United States.

This is a companion discussion topic for the original entry at https://www.ww2incolor.com/gallery/dramatic-photos/45000/recovery-odyessy
brummbar June 20, 2012, 8:21pm #2

To demonstrate the tremendous advances in the treatment of battlefield injuries, LIFE sent photojournalist Ralph Morse to the western front in late 1944 with this task: follow a single wounded soldier, from the outset of his treatment, through every stage, through rehabilitation. George Lott, an orphaned private from upstate New York, became that soldier. He walked into a command post in Lorraine on November 22, 1944, soon after an exploding mortar shell ripped into his arms. The result - 55 photographs and an accompanying text, published in the January 29, 1945 edition - was a model of effective photojournalism. And as later editions of LIFE in 1945 demonstrated, the story caused Lott to receive a deluge of cards, gifts, and even offers of adoption, from parents whose own sons were lost in combat. When LIFE published its final story on Mr. Lott in its June 16, 1947 (entitled "George Lott, 30 Months Later"), he remained in rehabilitation hospitals. One arm had become functional, but amputation of his more severely damaged arm was planned. Thereafter, the trail goes cold.
Taken from:http://forums.wildbillguarnere.com/index.php?/topic/12718-whatever-happened-to-george-lott-casualty/

I remembered his name,George Lott and his situation! Iread about him and saw several pictures of him in an old-WW2, "Life Magazine" which did coverage about him!

Here is a link to the original LIFE article.

The Most Iconic Photographs of All Time - LIFE

Experience LIFE's visual record of the 20th century by exploring the most iconic photographs from one of the most famous private photo collections in the world.