The BM-8 and BM-13 rocket launchers were named Katyusha because they were marked with the letter K for Voronezh Komintern Factory. Red Army troops picked the name Katyusha from a popular wartime song about a girl longing for her lover who had gone to war. German soldiers called them Stalin’s Organ because of their stacked array of launching tubes ( resembling a pipe organ ) and the noise the rocket motors made when fired off. The BM-8 were 3.2 inches in diameter, the BM-13 were 5.2 inches. BM-8 rockets were 28 inches long, weighed 17.6 pounds, had a warhead of high explosives that weighed 1.3 pounds, with a maximum range of 18,350 feet. The BM-13 was 56 inches long, weighed 93.6 pounds, a 10.8 pound HE warhead, with a maximum range of 28,350 feet.
These systems could be mounted on a truck or a tank and had a traverse angle of 20 degrees. Despite having limited accuracy, they did have a devastating effect on ground targets. They would make a very loud and shrill noise when fired that gave a powerful psychological effect to those on the receiving end. While less accurate than standard artillery, a battery of four BM-13’s could fire a salvo in 7-10 seconds that delivered 4.35 tons of high explosives over 4,300,000 sq. feet ( 400,000 sq. meters ), roughly equivalent to 72 cannons. A proficient crew could, immediately after firing, redeploy to a new location preventing possible counter-battery fire. The main disadvantage to the Katyusha’s was the much longer time it took to reload, where a regular artillery piece could keep up a standard rate of fire. 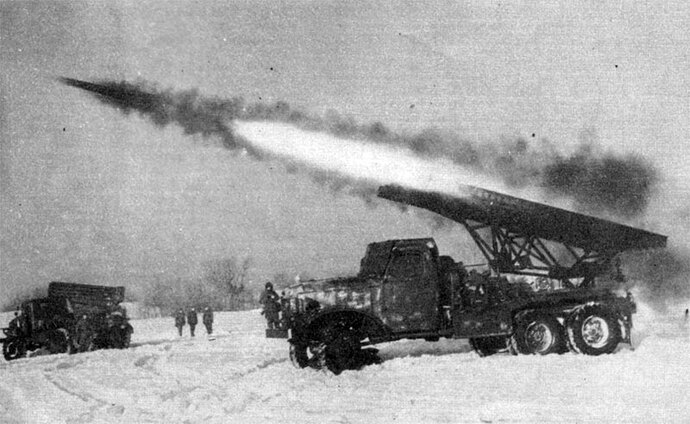 “Limited accuracy” is a bit charitable - “accuracy” was a very hazy matter with the Stalin Organ or, indeed with its German counterparts of the Nebelwerfer range. When these things were fired, the only safe place to be was behind them - well behind them, unless one wished to be roasted alive by the exhaust. Actually, I tend to view their inaccuracy as an advantage, in a way. Used as a general, medium-to-long range bombardment weapons, these free-flight, firework-style weapons were much feared precisely because those on the receiving end had only the most general idea of where the rockets might land (the same might reasonably be said by those who fired them). Of course, this characteristic made them quite unsuitable for any use requiring any precision. If there were any doubt about the Germans’ attitude to Warsaw during the 1944 uprising, their extensive use of Nebelwerfer-type weapons of all sizes against the insurgents should end it. Best regards, JR.

We would call them area suppression weapons and by your own description were effective in that role.

I have spent considerable time on the recieving end of mortars rockets and a few other things.

This has a great effect on many levels.
Rockets, at least announce their impending arrival, not so mortars.
Friend at Camp Katum with 240 mm. The best kind-a dud. 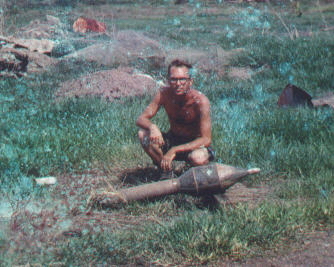