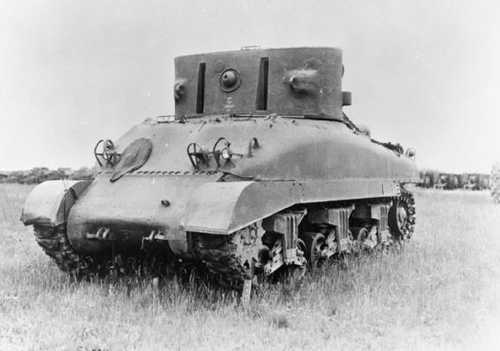 This is a companion discussion topic for the original entry at https://www.ww2incolor.com/gallery/us-armor-vehicles/45695/tank-technology
ThunderboltFan June 8, 2012, 2:12am #2

CDL=Canal Defence Light, a British secret weapon which was a carbon-arc lamp of immense brilliance inside a tank turret. The light was reflected in a concave mirror at the back of the turret and shone through the slit in the turret front. The name was a security term to disguise the true nature of the device. It was intended to be used during night-time attacks, when the light would allow enemy positions to be targeted. A secondary use of the light would be to dazzle and disorient enemy troops, making it harder for them to return fire accurately. The secrecy that surrounded the device meant that many commanders were unaware of its existence so couldn’t include it in their planning. The only examples actually used operationally were mounted on Grant tank hulls. This experimental version which has two slits in the turret. (Some of this text has been copied from Wikipedia.)

It would become a priority target fairly quick with that bright light.

It worked well when used in specific circumstances but some of the claims were exagerated and the 88mm had a filter (green sun fliter) that could be used by the gunner to actually see the light slot.

It relied heavily on a surprise use and after a short while it would not be nearly as effective.

A small test against US troops in the UK.

At another demonstration, American troops were placed on a hill and warned they would be attacked from a hill 1 1/2 miles away. At the start of the attack, two CDLs came round each side of the hill on ‘scatter’, this manoeuvre broke up the hill’s outline and enabled three others to move on to the crest. When on top, they opened their shutters to display a ‘steady’ beam which was the signal for the two 'scatter CDLs to change to ‘Steady’. The tanks moved down the hill in line abreast, in the manner already described, with troops and tanks hidden in the ‘cloaks’ of darkness. At the bottom lay the river Lowther with a small bridge which had to be crossed. This was achieved by the outside CDLs closing their shutters and moving across the bridge where they again opened their shutters when spaced thirty yards apart. This enabled the other CDLs and supporting vehicles to move across unseen before opening up as well. The first thing the American officers and troops knew was when the lights were extinguished revealing British troops holding fixed bajonets at their chests.
General Eisenhower was so impressed when he saw the CDL that he ordered that they were not to be used before American units had them also, and a mini-Lowther was set up at Linney Head in South Wales were US units were trained in the use of what they code–named the ‘Shop tractor’. It was also laid down that this device would not be used by either British or Americans without prior approval of the British Chiefs-of-Staff. In this connection, it was considered to be inadvisable to use it in small numbers as an experiment but in large quantities as a surprise in a worth-while operation.

A good site about the CDL