To The Maginot Line by Underground - French Forces | Gallery 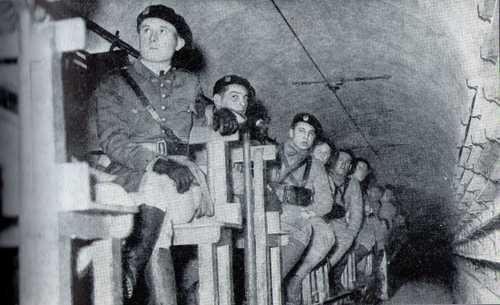 To The Maginot Line by Underground

France's great bulwark of frontier defense was the powerful Maginot Line, equipped with the most modern devices of the time. It was conceived by Andre Maginot. Maginot was an ex-service man was France's War Minister. The line was permanently occupied by specialist troops, who could be transported rapidly from one sector to another in secrecy and in perfect safety by means of the underground trolley system seen in the above photo. Unfortunately the Germans didn't play by the rules and simply went around the Maginot line instead of attacking it.

This is a companion discussion topic for the original entry at https://www.ww2incolor.com/gallery/french-forces/31805/to-the-maginot-line-by-underground
komandos10 May 20, 2010, 10:05am #2

Why the Frech didn’t built the Maginot line on all their Eastern borders with Italy,Germany,Switzerland,Luxemburg and Belgium?Why?
Because of the lack of money?

Cost was an issue - the Maginot Line defences actually constructed were enormously costly to the French exchequer. However, given the high level of apprehension at the prospect of another German invasion(understandable), questions of cost might not have been enough to deter the French from extending the Line along the their borders with Luxembourg and Belgium, were it not for another factor - miscalculations as to the development of Belgian policy. French politicians and generals seem to have had a lot of rather odd or outdated ideas that contributed to their country’s defeat in 1940 - most were military (like the belief that the activities of air forces would more or less cancel each other out without having much effect on fighting on the ground), but some were political, and one of these related to Belgian neutrality. Since Belgium becoming an independent state in 1830 (constitutional monarchy from 1831), the middle-class democratic politicians who ran it had, for the most part, relied on neutrality to keep their country out of other peoples’ wars. (More mundanely, perhaps, there was also a continuing degree of reluctance to sustain high levels of military expenditure.) Given the realities of geography, this was difficult, but it is hard to see that they had much choice, most of the time. The neutrality policy led to the Belgians suffering a severe fright in 1870, when Prussian and allied German forces massed briefly opposite Luxembourg - but in the end, the Prussians and French decided to fight the Franco-Prussian War elsewhere. 1914 provided something much worse than a fright, when neutrality proved no defence against a German invasion that resulted from a quarrel that was none of Belgium’s. It seems that the French political class persuaded itself that the awful experience of 1914 would persuade Belgium (in spite of all indications to the contrary) to abandon their policy of neutrality in favour of a French alliance in the face of any increasing German threat. Following from this, the argument ran, in the event of German mobilisation (or perhaps even before it), it should be possible for the French Army, acting on a Belgian invitation, to move forward to pre-planned defence lines within Belgium, thus deterring a German attack but, if not, at least “sealing off” that attack and ensuring that, this time, the WWI-style battle envisaged by the French generals would be fought on the right side of France’s northern industrial zone, rather than (as in 1914-'18) on the wrong side of it, from their point of view. In this scenario, having a fixed, fortress-based defence line on the Belgian border would have been an obstacle to the French Army, rather than an asset. Of course, if the same scenario had proved correct, something had to be done to protect France against attack further south - and the answer to that was the Maginot Line - in WWI terms, the Hindenburg Line writ large. The problem (well, one of the problems) with this exercise in wishful thinking was the the Belgians showed no willingness to abandon their neutrality in the face of the reviving German threat - in fact, if anything, they became more “militantly neutral”. Too late, one might say, the French realised that the Belgians were likely to stick to neutrality until the first panzer trundled up the Rue de la Loi in Brussels, and actually made a beginning to a fortified defence line on their Belgian border - but it really was a case of “too little, too late”. There is of course serious doubt as to whether a full “Maginot” shield would have protected France effectively in any case … but I have waffled on too long, and must sign off … With best regards, JR.

Did not have the permission to build by the municipality …

Great post JR. I think that at the time, the French and for that fact any other country in Europe, could not even conceive how effective the German air-force, armor and artillery could be. The degree of mobility achieved by the Germans was unthinkable for military minds of the day. Even studying the Spanish Civil War would give very little clue to the total degree of effectivness of the German Blitzkreig.