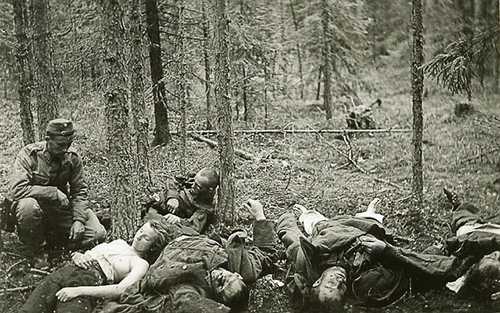 There were many women that served in the Red Army both in staff and front line positions. During the war many were killed or captured by the Finns. About than thinks this finnish soldier?

This is a companion discussion topic for the original entry at https://www.ww2incolor.com/gallery/dramatic-photos/19910/war-this-always-terribly...
I_am_Canadian January 8, 2009, 8:24am #2

I just watched an interesting show on the military channel the other night on Female Russian sniper’s of the Second World War. This one had over 350 kill’s, i believe was about 368 if im right, confirmed kill’s. But there were several that were in this one unit that had well over 100 each. Considering they usally only shot officer’s or people of importance to certain group’s in the chain of command. Take out the head of the unit, the group will fall apart with out the leader usally.

Well, it doesn’t help that the man in the picture is kneeling down by the woman and looking at her. That draws your attention to what he’s looking at also.

If i am not mistaken there is another picture similar to this of a female sniper. Also if you look at two of the soldiers to the right, one is missing his boots and maybe his pants.

Hi Navyson, I’m sure that’s the point of the photograph: that the Soviets were even throwing women into battle. I can see a number of ways the Finns might use that as propaganda. I’ve seen several photos like this, including a couple that are truly hideous, involving male and female corpses that died in winter and were photographed in spring.

I agree with Ardee that this was probably just an attempt to make certain that anyone looking at this photo would know that this is a woman.